Oh Brother, what have you been up to?

Little bro is a musician, and a rather good one too, just don’t tell him I said so please. He’s been with some chums called the Murder Barn recently making music that I think is the best thing he’s been involved in for a while. Have a listen below, the single is out in June but they have a free download from Feb which is a cracker too if you want something for home….. America is the one that’s got me hooked. 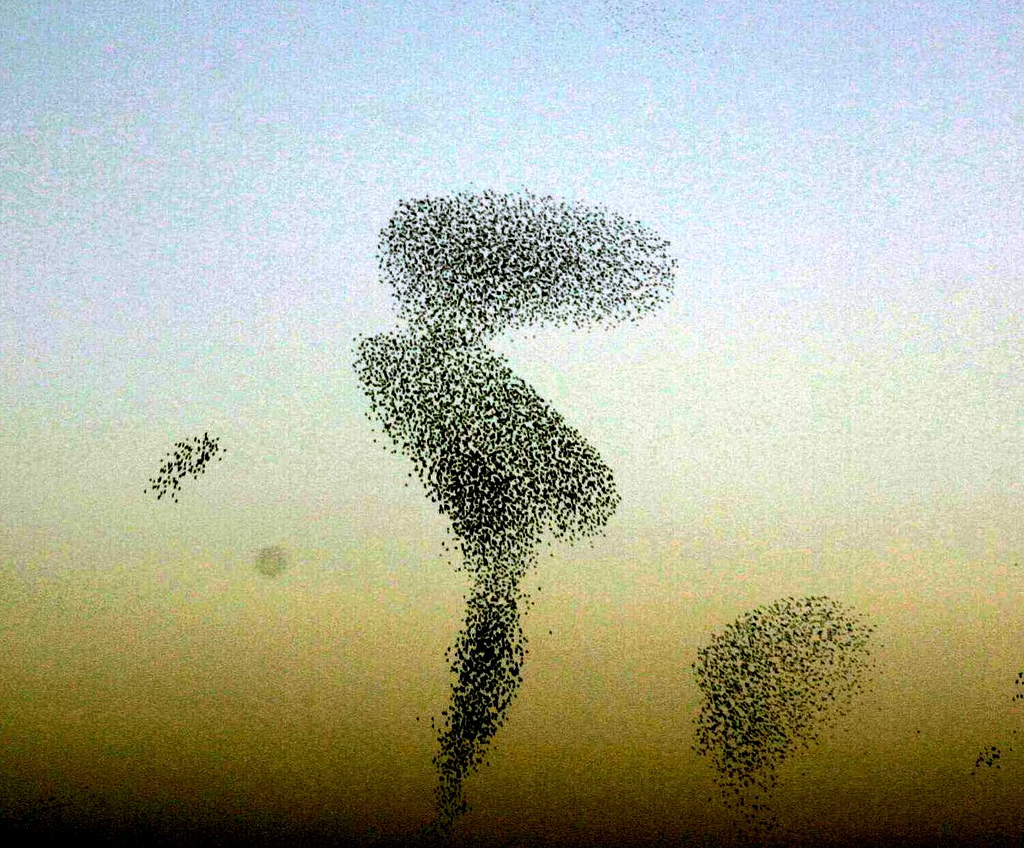 Bloggings been lite as we hit our winter rush but here’s something that just left me saying wow with feeling. A murmuration of starlings

1. an act or instance of murmuring.

2. a flock of starlings.

Music to feed the Soul

It’s been a profoundly musical day for me today, and everything I have listened to has moved me enough that the Facebook update I was going to post, has turned in to a blog post.

It started by listening to the Smiths “The Queen is dead” at work this morning, and wondering how lucky we are that Johnny Marr and Morrissey came together. We then had a short walk as a family this afternoon in Duncliffe Woods, and there was a particular bird that haunted the woods with it’s song as we wandered through the leaves.

Jack shared an early video of James brown dancing on facebook this afternoon that had me trying to bust some moves at 38, and after a house clear up Cath made my evening by surprising me with a programme she taped for me off Sky Arts last night of the making of Stevie Wonders “Songs in the Key of Life”. If you haven’t listened to it yet, you need to buy it and devote some time to it in my humble opinion. It’s simply his best album and is underpinned by a strong spirituality and musical open mindedness that still has it as a classic for me now.

I’m tired from a slightly manic couple of weeks, and today has been a real tonic in reminding me that listening to music, rather than having it on as a background to life, makes a world of difference in how it uplifts you.

I am a firm believer in trying to recycle as much as we can, and in making as good a use of the earths resources. One site we have used for some time now is freecycle. Essentially it’s a board that matches up people who are getting rid of stuff with people who want bits and bobs. You can either post an offer of an item when you want to freecycle something, or a wanted post when you need something. We used it extensively in London getting rid of wardrobes, blinds we no longer needed and even baby clothes. We also asked for the occasional item such as a pasta maker which we then freecycled at the end of our need for it. The only thing that you need to bear in mind is it has to be completely free, no charge from either side.

Since we have moved to Dorset, we have been using the North Dorset Freecycle group. Freecycle is divided up in to different areas and there are different characters to each group. My mild frustration with the North Dorset group right now is that there are so many wanted posts compared to offer posts. It could be down to the current economic climate, but I am surprised at the number & expense of requests of items such as washing machines, power plates etc that are currently on there. I am not sure what you could do to tackle this, as I am sure that some posts trigger a memory in people of something they have that they no longer need, which will fulfill a need for someone else. My own thoughts are that perhaps you need to have offered an item before you can post a wanted request.

Small niggles aside, I have a huge amount of respect for freecycle and what it aims to acheive. As well as recycling and ensuring less stuff goes to landfill, I seriously rate Freecycle in terms of getting joy from giving something away you no longer need. Having watched a simple life recently, there is much to be said to for the pleasure of giving, both from the pleasure of the receiver but also giver.

I feel ashamed, dirty and soiled. I am worried about keeping a dark secret that might creep out in conversation in a tired and unguarded moment. The secret? I am rather pleased about the Conservative / Liberal Democrat coalition now in place. Writing those words, immediately leads to a sense of panic to try and justify my position to friends who’s politics I agree with, and to prevent the mickey taking from those who I don’t. I’m going to relax though and just take my time a little as I have not been this scared, encouraged, apprehensive and hopeful about politics for some time.

I voted Liberal Democrat at the last election and have done for some time now. I have never liked the Tories as I think their policies are guided purely by self interest rather than out of any concern for our society as a whole. I was massively looking forward to the election result after what I thought were some excellent performances by Nick Clegg, especially in the first leadership debate, and the upswing in LibDem support in the polls. It didn’t translate to votes though (that’s another post in itself), and I awoke along with everyone else on Friday, bewildered, despite the polls telling me in advance that a government simply wasn’t going to be there. BBC News 24 then became my friend, and I have never watched as much political programming as I have this last week, though I will still avoid Sky like the plague for this sort of journalism. My heart leapt when it was announced that Labour were also entering in to negotiations but on conclusion of the Liberal / Conservative talks, I found to my suprise, that I wasn’t as upset or angry as I thought I would be.

Numerically it was never a goer to do a deal with Labour, back bench revolts would have led to votes failing fairly shortly in a progressive alliance govt, despite the similarities in politics. An early General Election would have come calling with a minority Tory govt as well, and I really don’t think that this is an option with the current crisis in Greece. As a result, the coalition is a moment I’m actually rather proud of as intrinsically British. Two parties with completely different ideologies have come together and used common sense to hammer out an agreement. They have agreed where they can, compromised where they can’t, and held their ground on beliefs they will never surrender. I know some people will greet it with cynicism, but at this early moment, I genuinely hope it pans out well. The fiscal state we are in, is as bad as any we have been in for some time, and we need a stable govt to tackle it. I also think that some (not all) of the policies I disagree with on the Tory side, have been ameliorated by having a coalition Govt and toned down. Likewise the Liberals have a chance for the first time in 70 years to put some of their policies in to effect, and I am hugely excited by that.

I still have concerns we will not get the real reform I want – voting reform. Stephen Fry states far more eloquently than I can before the deal was done, why the Tories will never go for electoral reform. Now the deal has been done, a referendum is promised but only on the Alternative Vote system rather than the fairer proportional representation system. I also think the Liberals will lose more support from people who having voted for them, do not quite understand the reasons as to why they have joined up with the Tories. So here I am, slightly freaked out by the fact that the party I support is currently in love and cracking jokes with the Tories. I can’t wait for normal service for resume and for me to carry on taking the mickey out of the Tories and campaigning against them, but although my heart is groaning right now, I actually think my head is right, and a good outcome has been achieved in the circumstances.

Oh my, this site is very simple and quite entrancing, sometimes funny, sometimes a bit more thoughtful. Young me/now me has people recreating childhood photos and showing the two images next to each other.