Cycleboating the watery kingdom of Dorset

Right now we are building an ark down here in the South West of England, that much rain has come down over the last few months. Most of my recent posts have been about how much rain we have had and this one is no different. We had a red weather alert from the Met office for this weekend and boy did it deliver. Saturday night was a lesson in just how loud rain can be when it hits a roof. It sounded like the supporting cast of Stomp had decided to play outside our window.

We had planned to head out for a cycle ride with some of our friends Sunday afternoon and as luck would have it, we were graced with blue skies and sunshine. After what has felt like a decade of grey clouds and rain, there was no way we were staying inside despite the flood warnings, so we headed off to the Dorset Trailway. The trailway is an old train line brilliant for cycling and especially great for kids as there is no traffic. We were due to park near to Shillingstone and travel from there, but flooding had blocked the road to our usual parking spot. We turned around to take the road in to Sturminster and as we came in to town, we thought we could see the sea to our left. As we looked closer though, we realised that it was the flood plain for the river Stour!

Parking at Sturminster 4 adults and 4 kids duly set out and it wasn’t long before we saw the results of two weeks solid rain. This is the view from the bridge over the Stour. My pro Photoshop skillz have rendered squiggly lines where the edge of the river usually is. Flood plain is to the left on the first photo and to the right on the second. 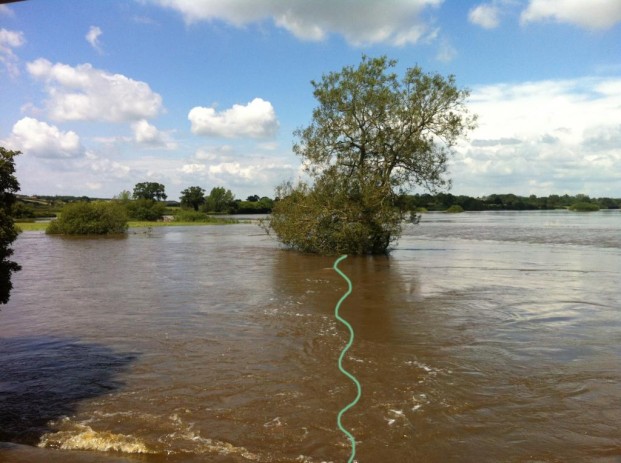 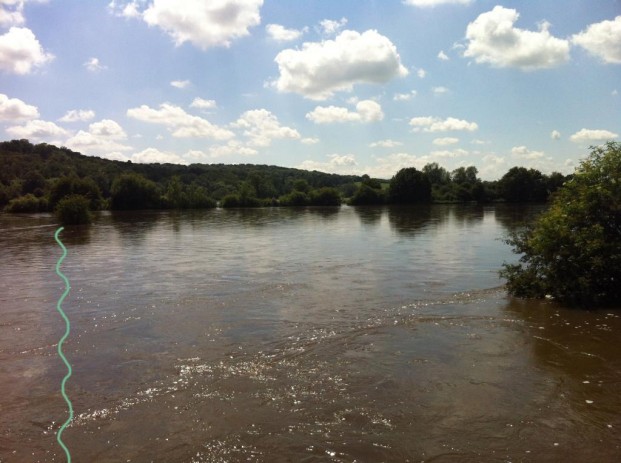 After a bit of watching the whirlpools and wondering at the scope of the flooding we paddled on. We crossed through some fairly meaty puddles and a stream where water came over our feet as we cycled through. It was as we got towards Shillingstone though that our jaws dropped. I’ve never seen the river Stour as bad as this and our road looked impassable with very deep water. 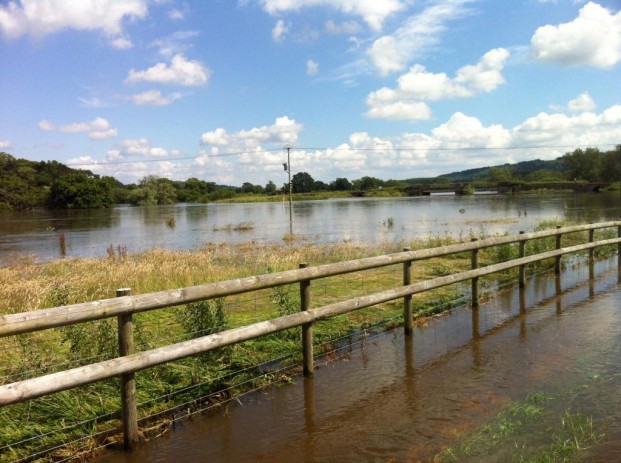 Cath duly rolled her trousers up and waded out to see how deep it was. Coming half way up our thighs we reckoned we could make it , so we left the boys bikes and started to wade through. 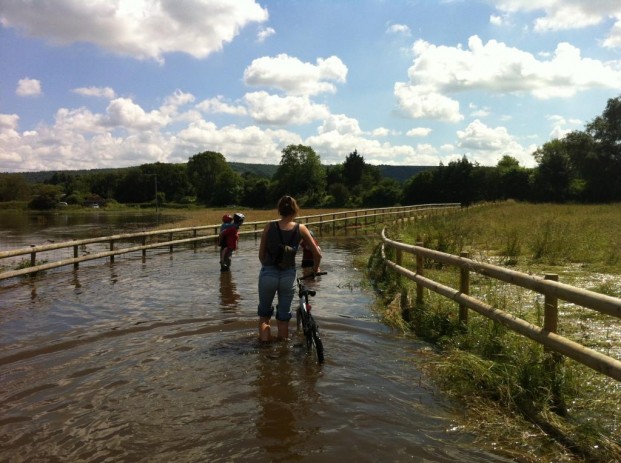 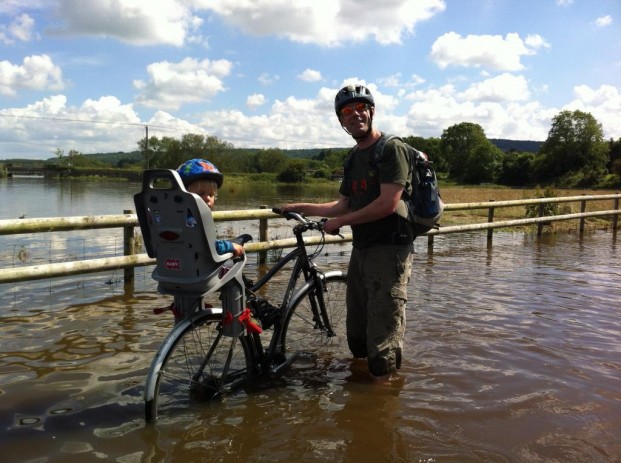 Needless to say the kids had an amazing time wading through water up to their waists and enjoying the rare summer sun. They did a great job of getting everyone soaked and when we ferried their bikes across, they all rode them in to the water at full pelt to fall off.

After the cycleboating we carried on to our destination, stopping at Shillingstone station via the 1950’s for an ice cream, the flood plain making the platform appear to float on the river.

We then returned back down the trail repeating the wading, swimming and falling in to the water. That stopped fairly sharpish as the local farmer pointed out his sceptic tank and goat pens had been flooded by the river. Nice.

Ah well, a quick hose down later and all that’s left is the memory of a beautiful day where cycleboating has officially been invented as a means of transport. Has anyone else been affected by the floods?