Cranborne Chase and the search for spring 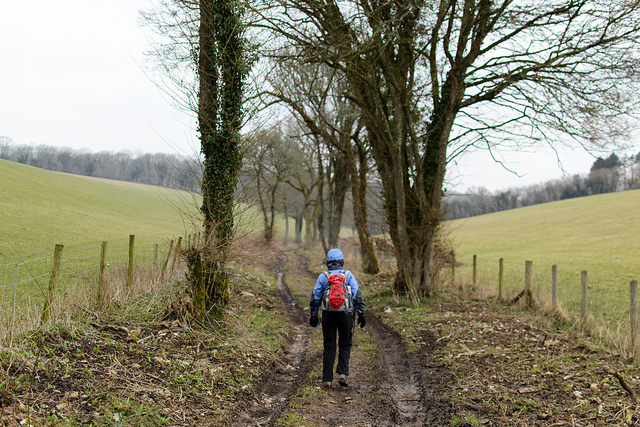 You’re still reading this? You need congratulating for some serious patience. Almost as much patience as mother earth has in waiting for that most elusive of seasons, spring, to disrobe her wintry dressing gown and step out with a welcome cup of tea for the landscape. So life’s changed and I won’t bore you with the details, but there’s a smile on my face, even if time spent trawling the Twitter timeline and keeping in contact with you good folk has taken a battering. We’re back to being simple, working hard and spending time en famille, resisting the plaintive call of the smartphone. I also wanted to write again, so here we are – nice to see you, you’re looking well if I may say so.

I had a lovely post lined up with all our outdoor stuff since last year but lets keep it fresh shall we? A cock-up in holidays meant I got to go walking with wifey as the moons aligned in a rare pattern of childcarus synchronous. Sixpenny Handley was our destination with a name suggesting a slightly less cluttered landscape than Britain currently offers. Woods of the ancient variety were also on the menu along with some stunning views that make you immediately realise why Cranborne Chase has had an area of outstanding natural beauty levied upon it. I love mountains, but woods draw me back time after time and this wander delivered them in spades. The smell of leaf mould has a hold on a part of my memory and soul that it won’t let go of right now.

Garston woods at the start is an RSPB wood and they have fenced off certain areas to allow ground nesting birds to have some respite from the deer. Humans are allowed however, so we started our stroll gently through the barren woods, layering up with hats and gloves as the cold made itself known. That was the theme and feeling of the day – cold, both in the landscape around us with the lack of spring growth and the chill that had to be kept at bay by our brisk walking. We meandered through the woods before heading up on to the top of the Chase and were rewarded with views both South and North that you would not think Wiltshire had the right to grace you with. Flakes of snow fluttered around us and the sound of breaking glass underfoot amused as we smashed puddles on the path. A swoop downwards from the chase led us to the rather expensive but worth every penny King John Inn where fire and food welcomed us. This isn’t a food blog but the stand out course had to be the fresh donuts with apple sauce inside, toffee sauce outside and mulled cider to accompany. This wasn’t walking any more, it felt like gluttony and frankly, I didn’t care.

Leaving a pub after beer and food to start walking again feels akin to having to strap on a diving suit with weights, but the second half of the walk was just as delightful. Passing through the Rushmore estate we soon ventured in to woods that felt and looked as if they had been around for a fair while. The results of coppicing over the centuries delivering stools and tree shoots as numerous as the birds that scooted above us. 13 miles turned out to be 14 miles but in the end, we weren’t counting.